I got to do some bona fide lab work today, which was a nice change of pace. I’ve been taking samples of larvae for DNA sequencing at various points throughout the experiment:

These samples have mostly been stored at -20degC in .5-1 mL of RNALater, but duplicates of many were also stored in ethanol (1st in 75%, then in 95%). Earlier in the summer I wanted to do a test extraction to see if there was a particular storage method that worked best and figure out which extraction kit to use, but then the oysters needed maintenance 6 days a week and all of a sudden in was almost August. With the growth rate experiments and larval production essentially done, I finally had a day to do the test extraction.

END_OF_DOCUMENT_TOKEN_TO_BE_REPLACED

This was a stressful time in my graduate school career. I felt torn by indecision about what the best wet lab method was to get the data I wanted- given the fact I had very little research funds. When I wrote a few grant proposals in Spring 2014, I had chosen to do the ezRAD method with pooling of 20 individuals from a site per library with one unique barcode per library. As the name suggests, this method is technically straightforward as it uses standard Illumina TruSeq preparation kits, with additional benefits of eliminating PCR-induced bias and not requiring sonication. I had enough money for one kit of 24 barcodes and 1 lane of Illumina HiSeq sequencing. Perfect! But in October, I met with a couple faculty members (one doing plant phylogeograhy using high throughput sequencing, the other a bioinformatics/population genomics guy) and they strongly discouraged against the pooling idea. While there was some support in the literature (Molecular Ecology 2013 Gautier) for the ability to get accurate allele frequencies from pooled data, numerous other papers (such as Molecular Ecology 2014 Anderson) cast doubt. By pooling individuals, I would limit the information I could glean from my sequencing data (ie observed heterozygosity or any form of haplotype analysis) and also be making an a priori assumption that the sites I collected were indeed separate populations.

Alright, so pooling was out. But if I could barely afford 24 barcodes, how could I possibly afford enough unique barcodes in order to sequence 96 individuals on a lane?? Fortunately, a curator at the Field Museum offered to share her lab’s Genotype-by-Sequencing (Elshire-2011-A Robust, Simple Gen) adaptors and barcodes for free. The only problem was they only had 48 barcodes, and my goal was to sequence at least 96 individuals per lane (each lane costs $1100-$1800). This act of scientific kindness led me down another path of obsessive pros and cons lists. Numerous grad students, postdocs, and professors (some I had never met and only stalked on the internet) kindly put up with my frantic emails as I tried to figure out wtf to do. Long story short, I decided to accept the 48 GBS barcodes and use a combinatorial index approach as in Double Digest RADSeq. Excessive pros/cons lists attached.

Cost of Pooling with Different Methods

This summer I’ve embarked on my first official “field season”, collecting oyster tissue from two species on the West Coast of North America for an exploratory project to help me determine which species will be favorable for my thesis research. If you’re feeling up to a potential snoozefest, here is a proposal I wrote for the Hinds fund, an award for evolutionary biology students at UChicago primarily in their 1st or 2nd years to help support preliminary data collection and develop grant writing skills. It outlines some of the where/what/why/how of this project. Hinds Proposal 2014 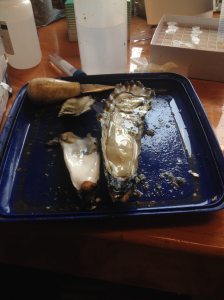 Starting out, I had three (overly ambitious) aims for this project:

As of writing, I’m about halfway through my field season and already there have been some reality checks about what is and isn’t feasible, though I’ve picked up some new ideas, too! Stay tuned, as I’ll try to retroactively write up some of my coastal adventures so that I can update the second half of my season in real time.