At 9:00am I turned off the chiller and took a sample of oysters from the overnight treatment. It appeared that many of the oysters from the overnight treatment were gaping slightly, but they still offered resistance during dissection. I dissected 6 cultch set oysters per population and 4 tile set oysters and put the whole body tissue in RNALater. I also dissected 10 oysters per population from the control treatment. Instead of moving the overnight oysters over to the control tank, I let the temperature gradually increase by draining some of the tank and adding ambient water. We switched the control tank over to a flow-through system with live algae dripping in. At 2:00pm I moved the overnight chilled oysters to the control tank. The hatchery folks are going to keep an eye on the oysters for 2 weeks, after which they’ll sample all of the survivors.

I took apart the tile trays and drained out the tank they had been in. Some tiles that had only a few oysters on them were not used in the temperature experiment. I dissected these and put the whole body in RNALater, figuring they could be used for genotyping or looking at epigenetic in the F2 generation. Some of them I took a picture for size data and some of them I measured with a ruler.

Gave a talk to the PSRF monthly meeting in the morning. Afterwards I went with Alice to the dock and brought up the cultch set F2 oysters to the hatchery. As there weren’t very many tile set oysters, I wanted to supplement the experiment with these. I put them in one of the setting tanks outside in static, ambient water.

Alice and I built a little “house” for the chiller to protect it from the rain. We set up the chiller in the smaller section of the setting tank in order to cool down the water quicker. The chiller was set to 0degC and turned on at 10am. Water on the other side was at 11degC, a little cooler than ambient due to the air temperature overnight. For the controls, 250+/- 5 cultch set oysters from each population were placed in 180 micron silos hanging in the ambient temperature side of the tank. I put around 350 oysters in silos on the chilled side at 11:30am when the temperature was at 7degC. At 1:00pm the temperature was at 0degC and maintained that temperature all day. At 1:30PM I added some tiles to the control and chilled tanks. 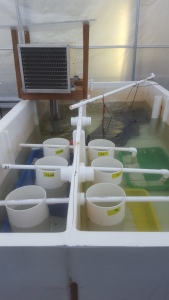 Chilled treatment on the left and controls on the right 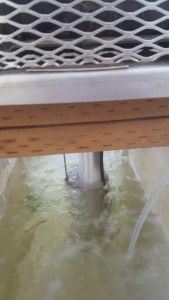 Tiles added to treatments. The numbers represent oysters on that tile after sampling for gene expression. F = front of tile, S = side, B= back

At 4:00pm I sorted out 200 cultch set oysters from the chilled tank and added them to new silos in the control tank labelled with the population name and “3 hr chilled”. In addition to looking for differential mortality, we are interested in looking at temperature-induced gene expression. I put some oysters from each group in small (300 mL) cups with chilled water and then dissected 6 from each population and put whole body tissue in 1.5 mL tubes with RNALater. This took about 45 minutes total but I tried to alternate between populations while dissecting. I took pictures of most dissected oysters with a ruler. At 5:00pm I brought in one tile for each population from the chilled tank and dissected 4 oysters per population, giving 10 samples each. These samples were placed in the fridge overnight. The other ~150 oysters in the chilled tank were left there overnight to be sampled the next day.

On Sunday 11/1/15 I took an early flight out to Seattle for a week of torturing oysters. My goals for the week were to take pictures for size of my juvenile F2 oysters and do an experiment to test for differences in resilience to cold temperature shock.

Over the summer I set juvenile Olympia oysters on PVC tiles and hung them off the dock by the Manchester Research Station at the end of the summer. Unfortunately, one of my stacks of trays fell off the dock a few days after during a crazy storm. They sat on the bottom for a couple of days and then were rescued by a crew that left them sitting on the dock in the hot afternoon sun. Once the hatchery crew realized where they were they quickly put them in a tank, but the stack may have been out of water for a few hours. They were redeployed on 9/10/15 with safety line and haven’t had an issue since.

On 10/14/15 two of the PSRF hatchery crew, Stuart and Laura, pulled up the trays and photographed the tile to get size information. There was a lot of mortality on the stack that had been out of the water, but the other stack had good survival. 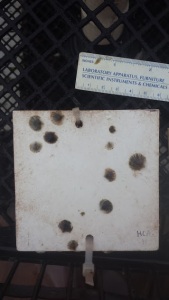 Picture taken on 10/14/15 of a tile with Hood Canal juvenile oysters.

Today I pulled up the trays and took pictures of the tiles. It’s exciting to see how much they had grown, even in just 3 weeks! 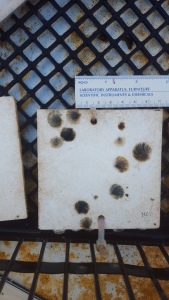 I left the oyster tiles in a large, static tank at ambient temperature and splashed in some live algae. Alice and I also checked on some F2 oysters that were set on cultch at the end of the summer. These were basically leftover larvae after I had enough in my tanks with tiles. As larval production was really ramped down at the end of the summer, I suspect that these are from only a few individuals per population. To get a rough estimate of how many there were per population, I measured out 50 mL of oysters, counted them, and then measured the total volume of oysters.

At 9:30am we turned on a chiller in one of the outdoor setting tanks and set it to 0degC. I monitored it throughout the day to see how long it took to get to 0.

Playing around with some data on protoshell length taken by Ryann (PSRF intern) from the salinity experiment.

Indicates that the means of protoshell length are significantly different (yay!). 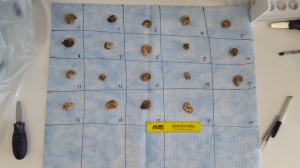 Last week, I decided to make a 2nd tank with tiles for each of the populations. This stemmed from not seeing as many setters as I’d like on the tiles in the 1st set-up, and because there were still so many in the “160” tanks. Also, having 2 tanks per population can mitigate “tank effects”- possible tank-specific differences that might confound population differences. I picked up some more PVC sheet, had it cut into 4″ x 4″ tiles at the store, and roughed them up in between today’s tank cleanings. To ensure enough larvae set per tile, I’m going to add up to 60,000 larvae per tank over the course of 1 week. While this means some larvae will be a few more days older than others, after an extended period of time this will be insignificant for measuring growth rate.

Did counts for NF_SetA and HC_SetA to get an idea of how many were left to set (ran out of time for SS_SetA).

Nine larvae/setting tanks to clean! Michael and I had an evening flight out east for his cousin’s wedding, so today was a pretty rushed day trying to get everything done and still make the 4:05p ferry.

Only saw some larvae in HC and SS. I ran out of time to take samples for counting, so just screened out the larvae, cleaned the broodstock buckets, and dumped the larvae back into the buckets.