This summer I’ve embarked on my first official “field season”, collecting oyster tissue from two species on the West Coast of North America for an exploratory project to help me determine which species will be favorable for my thesis research. If you’re feeling up to a potential snoozefest, here is a proposal I wrote for the Hinds fund, an award for evolutionary biology students at UChicago primarily in their 1st or 2nd years to help support preliminary data collection and develop grant writing skills. It outlines some of the where/what/why/how of this project. Hinds Proposal 2014 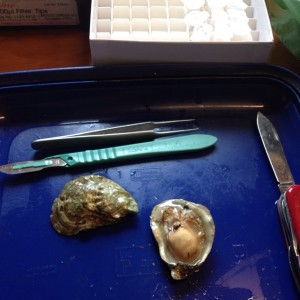 Starting out, I had three (overly ambitious) aims for this project:

As of writing, I’m about halfway through my field season and already there have been some reality checks about what is and isn’t feasible, though I’ve picked up some new ideas, too! Stay tuned, as I’ll try to retroactively write up some of my coastal adventures so that I can update the second half of my season in real time.

2 thoughts on “Oysters on the Brain”